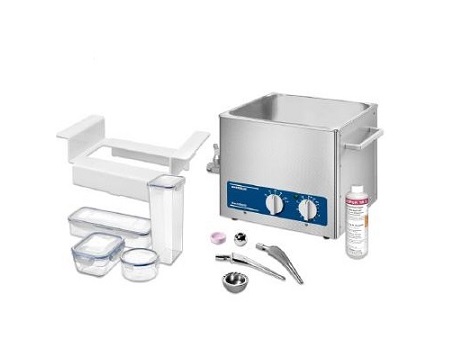 Implants improves the quality of life

Formation of biofilm on implant surface

With growing use of implants, modern medicine is facing an increasing risk of infections. Microorganisms on implant surface form biofilms, what makes them difficult to detect by conventional methods such as periprosthetic tissue cultures. For successful treatment of these infections accurate microbiological diagnosis is crucial. Such biofilms consist of anextracellular matrix of polymerized polysaccharide, in which bacteria are embedded.

The microorganisms in biofilm are transformed in low metabolic, stationary growth state. Over weeks to months, depending on the type of microorganism, implant material and host, acomplex three-dimensional structure develops, which consists of nutrition channels and rudimentary communication system resembling multicellular organism.
Free-living (planktonic) bacteria are killed by antibiotics and the host defense system, while adherent (biofilm) bacteria can survive and persist in the extracellular matrix of the biofilm.

Sonication removes more than 99.9 % of the biofilm bacteria from the surface

After removal in the operating room, implants are placed in the air-tight container and transported to the microbiological laboratory. After addition of Ringer’s solution, the implant is processed by vortexing (30 seconds) and sonication (1 minute) to dislodge (planktonize) microorganism into the surrounding fluid (sonicate). The sonication fluid is cultured on aerobic and anaerobic agar plates and inoculated in broth media.

Sonication removes the ­detection of bacteria up to 10,000 times ­compared to peri­prosthetic tissue cultures

• High accuracy
With low-intensity sonication, microorganisms are dislodged from the implant but not killed, enabling high sensitivity of conventional cultures (Fig. 4).
Particularly difficult to detect microorganisms (including small-colony variants), individual morphotypes and mixed infections can be better detected. The sensitivity is particularly improved in patients receiving previous antibiotics, due to better survival of bacteria in biofilm. Ultrasound reaches through surrounding fluid the whole implant surface, which is associated with high specificity.

• Quantiative biofilm assessment
Since bacteria survive, but not replicate in the sonication fluid, quantitative assessment of removed biofilm is possible. The microbial density is expressed as number of colony-forming units (CFU) per ml of sonication fluid.

Formation of biofilm on implant surface

Sonication removes more than 99.9 % of the biofilm bacteria from the surface.

Sonication removes the ­detection of bacteria up to 10,000 times ­compared to peri­prosthetic tissue cultures.